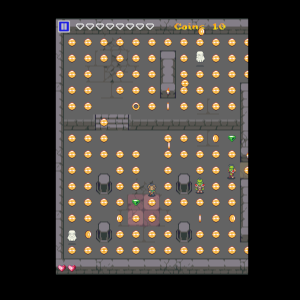 In Tomb Thief, you explore the tomb of a long-dead wizard whose magic has seeped into the various gemstones contained within. You can use the effects of these gemstones to thwart the tomb's various denizens, including orcs, ghosts, skeletons, and spiders. Each type of gem has a different effect and each monster exhibits different behaviors.

Coming Soon! I created the game in Phaser.js and TypeScript as a pixel-art, arcade-action dungeon scroller. 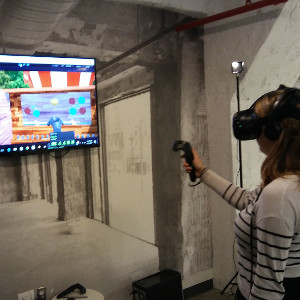 As I began to develop curriculum for Grand Circus' Augmented and Virtual Reality Unity3D bootcamp, I developed this game both for practice and as a demonstration to raise interest at various events. The game was first played publicly at the VR Gallery for Detroit Startup Week 2017.

Developed for users who might never have played VR before, it starts with an onboarding level for them to orient themselves and get used to the controllers. When they have demonstrated that they've mastered throwing baseballs with the controllers, they're taken to a carnival throwing gallery with a variety of stationary, spinning, and moving targets, to earn as many points as they can with a limited number of balls. The game used SteamVR and ran on the HTC Vive. 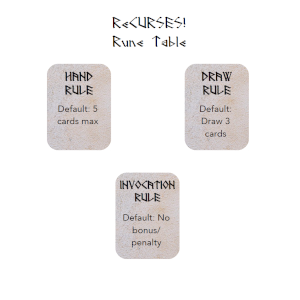 reCURSES! is a card game that teaches bootcamp students how recursion works.

Several wizards, in search of greater magical power, have discovered an ancient library deep in the mountains. There, they've unearthed a wholly forgotten kind of magic—recursive runic magic. After weeks spent reconstructing this ancient practice, their rivalries have gotten the best of them and fighting has erupted. Now these wizard-scholars are dueling to be the sole master of this new magical knowledge.

This game was developed in fulfillment of requirements after I attended the 2016 Edugaming Level II Workshop at Lehigh Carbon Community College and piloted with a group of my bootcamp students. The game structure takes some inspiration from the Fluxx games, where the rules are ever-changing based on cards players put down. 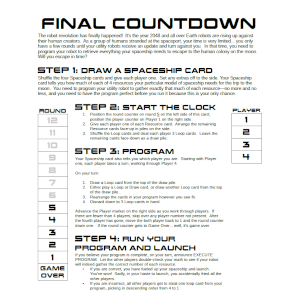 Final Countdown is a competitive board game that teaches students about programming loops. Students use drawn cards to build simple programs to gather supplies for their spaceship to escape impending robot annihilation, and learn the power of nesting loops as they go.

Final Countdown started as a workshop exercise at the 2015 Edugaming Conference, where I developed the idea along with two other attendees. After the workshop, I re-themed it (from making cupcakes to the theme described above) and further balanced the game before using it with my high school classes. 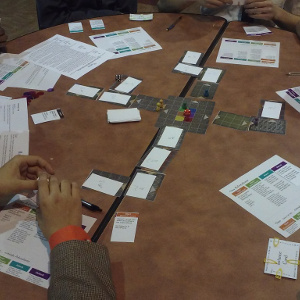 Dragonslayers is a cooperative board game that teaches high school students fundamental concepts of object-oriented programming including inheritance. 2-6 players fight monsters on their way through a dungeon, developing their characters' stats and abilities through Experience cards, trying to find all four gems before the dragon awakens.

In the summer of 2015, I attended the excellent, NSF-supported Edugaming workshop for teachers at Lehigh Carbon Community College. Dragonslayers is the project I developed and piloted after the workshop to fulfill its requirements. 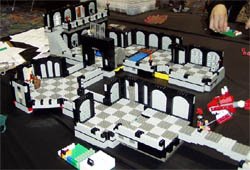 BrickQuest is a d6-based tabletop fantasy game played with LEGO bricks--even the character sheets are built of LEGO! I designed this as a quick-to-learn, easy to play game for conventions and ran it multiple years at GenCon and Origins to very positive reviews. There are player groups in the Chicago and DC areas that still play this game, or I believe they did until the pandemic.

Game site (don't let the site's age color your perception of the game!) 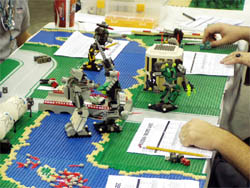 Buoyed by the success of BrickQuest, I designed BrickMech around a similar d6 mechanic for resolving combat. I also ran this game at GenCon, Origins, and several local conventions. This is a "beer and pretzels" kind of game, quick to pick up and pretty fast to play. Its unique aspect, developed after the first rounds of playtesting, is that mechs are modular and can lose parts and pick up parts from the field to improve their stats.

Game site (don't let the site's age color your perception of the game!) 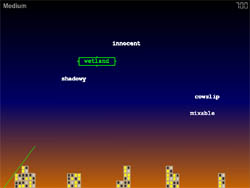 Typing Command is a fast-paced typing game inspired by the classic arcade Missile Command. To blast a word before it destroys one of the cities at the bottom of the screen, the player has to type the words as they descend. The game has multiple levels of difficulty, which determine both speed and length of words, and at higher levels some words enact different behaviors such as bouncing around the screen.

For a number of years I taught middle and high school Computer Applications, one component of which was typing proficiency. I built this game to give students a more fun way to practice. Because the game was built in Flash, it's no longer playable. 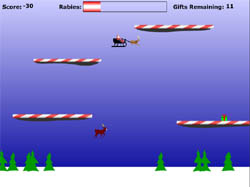 Santa's reindeer have caught rabies and are trying to ruin Christmas! Rudolph's still healthy and Santa has his sleigh, and together they're racing against the rabid reinder to collect all the gifts while flying between candy-cane platforms. With each level, the difficulty and speed increase, while a rabies meter monitors how much Santa and Rudolph have been exposed to the other reindeer.

As an interactive Christmas card for friends and family in 2001, I built this game in Flash. Because it was built in Flash, it's no longer playable. 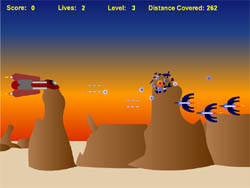 When Flash 5 came out, I couldn't wait to try it out with ActionScript to create games. Desert Patrol was my first effort, a pretty typical side-scrolling shooter where you flew your fighter through the desert against enemy ships and robots. Because the game was built in Flash, it's no longer playable.